As we find ourselves gently coming down from the rocking theatrical high that was our production of Hair, we have a sure cure for those feeling the post show blues: a Geoids quiz night hosted by our very own resident quizmaster, Dave Octave! Come along to Pimlico on Friday 3rd June to test your knowledge, memory and ability to not shout out the answer…

We’ll also be doubling up with our Annual General Meeting, immediately prior to the quiz. This is your opportunity to have a hand in shaping your society for the next year. We want to hear from you! What do you love? What would you like to see in 2017? What shows do you think would suit Geoids going forwards? Get those ideas flowing and come along to share them. The outgoing committee will be sharing an update of how the last year has gone and answering any questions you have.

Most importantly, you will also be able to hear from the candidates running for the committee for 2016/7 and cast your vote!

Download the full calling notice for the AGM and a committee nomination form. If you have any questions about this, please speak to a current committee member or email info@geoidsmt.co.uk. Minutes from last years AGM are available on request – please email us and we’ll send them out to you.

Our evening performances of Hair have sold out! If you’d like to see our 5-star show and haven’t yet booked, there are still some tickets left for the Saturday afternoon matinee.

You can book securely now at our online box office.

Be there or be square!

Our cast for Hair revealed

We’re delighted to announce our cast for April’s production of Hair!

Tickets have also now gone on sale. You can book now on our Ticketsource page.

Tickets for this year’s fun-packed 48-hour pantomime are on sale now – oh yes they are!

We’re returning to LOST Theatre at 4pm on Sunday 17th January to bring you a brand new production of Snow White – all rehearsed from scratch in less than two days!

Tickets are just £10 each, with a £5 rate for children and other concessions. Buy tickets online now from LOST Theatre.

Auditions for Snow White and Hair

We’ve released full information on auditions for our next two shows. If you’d like to get involved, please express your interest as soon as possible.

Our popular 48-hour pantomime returns in January and this time we’re putting on Snow White. Auditions, casting and first rehearsal will take place on Friday 15th January. We’ll rehearse throughout Saturday, get into the theatre on Sunday morning and then put the show on at 4pm on Sunday 17th January. It’s a hectic weekend but extremely fun and rewarding.

The 48-hour panto is always popular and we don’t want anyone to be disappointed, so please register you interest now. You can guarantee your audition spot by making a £5 deposit towards your show fees in advance. Get more information from the audition notice (PDF) and then register online.

Two weeks after the panto, we kick off our first big production for 2016 with auditions for Hair.

First round auditions will be in Pimlico on Friday 29th and Saturday 30th January, with callbacks on Sunday 31st. There will also be an extra audition slot for advanced dancers on the Saturday morning.

For full details, download the audition notice (PDF) and then email hair@geoidsmt.co.uk to secure your audition slot.

The Geoids Musical Theatre committee is delighted to announce the highlights of our 2016 season.

A perennial favourite, we’ll return to LOST Theatre with the exercise in cramming that is the 48-Hour Panto.

We’ll bring a full length pantomime, complete with songs and dances, from page to stage within just one weekend.

Auditions will be held at 6pm on Friday 15 January with rehearsals beginning immediately afterwards!

We’re taking a change of pace and style with this ground-breaking 1960s show.

Hair arguably defined the rock musical genre. It has amazing musical numbers (including “Hair”, “Let the Sunshine In” and “Aquarius”) and a strong, poignant message that reflects the political upheaval of the time.

On the Twentieth Century

It’s had an acclaimed revival on Broadway and now it’s coming to London!

On the Twentieth Century is a screwball comedy with book and lyrics by the team behind Singin’ in the Rain and music by Cy Coleman, who brought us Sweet Charity and City of Angels.

Set on a luxury train in the 1920s, it focuses on egomaniacal theatre producer Oscar Jaffee and his volatile personal and professional relationship with the arrogant film actress Lily Garland.

On the Twentieth Century is a show with a big sound, farcical comedy, and classic choreography.

Keep up to date

Sunset Boulevard is sold out!

Thank you to everyone who’s bought tickets for Geoids’ production of Sunset Boulevard. The show has now officially sold out.

Please do not contact the theatre regarding returns – direct any booking enquiries to geoids.sunset@gmail.com. No ticket exchanges or refunds are available.

There may be returns, which will be sold on the door prior to each performance, for that performance only. You will need to arrive at the Bridewell Theatre in good time before the performance and queue for any available returned tickets.

There are only three weeks until the House on Sunset opens its doors and tickets are selling fast.

The show has already been covered by BBC News, Broadway World, London Theatre and Playbill!

Sunset Boulevard opens on Tuesday 6 October and runs until Saturday 10 October, including a matinee on the final day.

Tickets start at just £15 (£12.50 for concessions) and are available from our online box office.

Friday 9 October is our special Gala Night. Tickets start at £19 and all guests will receive a complimentary programme and a glass of bubbly in the interval.

Don’t miss out: book now to see Norma back on the London stage. It’s not a comeback; it’s a return! 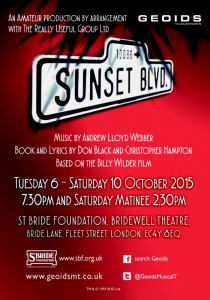 While we already have a small army supporting this show, it’s not too late to get involved in a backstage or production role (set construction, props, costume, hair/makeup, marketing, front of house), no matter what your experience. For more information, email geoids.sunset@gmail.com.

Sunset Boulevard will run each evening from Tuesday 6th to Saturday 10th October at the Bridewell Theatre, plus a Saturday matinee.

With pre-production for Sunset Boulevard well under way, the committee are already looking ahead to 2016.

We’re kicking off the selection process for next year’s shows and have a pitch document available on request. If you want to be a part of a creative team for 2016, get in touch.

Our plan is to produce two full musicals and one cabaret/concert during 2016. We’ve pencilled in one full show for late May and we’re looking to stage the second between late October and early December.

The deadline for proposals is Monday 27 July so don’t delay! Request a proposal document today by emailing geoidsmusicaltheatre@gmail.com.